Show me Show me: Chris and Pui Roadshow 2012

Yesterday we were lucky enough to be able to go and see TV's favourite double act....


My daughter, like most her age, absolutely LOVES Show me Show me. We have it on series record (Thank the Lord as it's no longer on Cbeebies so I my daughter can no longer get her daily fix there!) and she requests it on at least 5 times per day, broken up with some Mr Tumble in between fixes.


If she is not watching Show me Show me, she is singing the songs or acting out parts of the show that she knows off by heart she has watched them so much.... "We're going on a crunchy hunt, a crunchy, munchy, crunchy hunt, STOOOOP" is her latest favourite whilst stomping around the house!

As you may have gathered, she really is obsessed with all things Show me Show me. SO when I saw that Chris and Pui had a new live show touring this year I jumped straight onto the laptop (like I'm ever away from it!) to see if they were coming to town.....

YIPPEEEEE for us, they were coming to Lichfield, just down the road from us on 25th March. I'd looked previously at other shows for her but hesitated because of the cost. They all seemed a lot to pay when I wasn't really sure if she'd even enjoy them or not. I would have paid anything to take her to see her favourite show anyway, but luckily for us ticket prices were really reasonable at £18 inc booking fee for the two of us.

Even though I knew she loved Chris and Pui on the TV I was still a little worried what she might make of them in person. She had never been to anything like this before and had never even sat still anywhere for longer than 5 minutes before. After all she is still at the younger age of the shows intended audience at 2 years old. It was a gamble I was willing to pay. I wanted to see the show so I didn't care... (Oh, did I just say that out loud. Ooops)


We're off on a journey to play in the sky,
into the lift and zoom way up high!
Up at the top are friends that we know,
let's go and meet them and count as we go!

From the minute the show started to the very end she was the picture of happiness, despite a rocky start at home before hand where she was being her usual stroppy, 2 year old self. Chris and Pui were just the trick to drag her out of the terrible two's for 2 hours! She sang, danced, waved..... participating in all of the 'panto' style parts. She absolutely, thoroughly enjoyed it and didn't want it to end. Money well spent!

It was packed full of familiar Show me Show me characters and traditional rhymes for all to get involved with. Every single child (and adult) in that theater when I looked around me were animated, joining in with songs and actions, and full of beaming smiles.

As for the grown ups, well, Chris and Pui didn't forget us....Oh no, there are plenty of cheesy gags for the parents, all said very much tongue in cheek. Chris even mentions throughout how bad the jokes are, that's kind of what makes them good. And to be honest, seeing Isla so happy was what made me so happy.

Whats best about this show is that I think it has come from a genuine love of children and entertaining. This isn't just a job to Chris and Pui and isn't about money (there was no merchandise sold at the show and no merchandise anywhere for that matter which I think proves that), they just seem to get a real kick from making our kids happy. Also proven by the fact they have been around so long. Can you believe Chris has been going for 10 years? I remember him from TV when I were a nipper many many moons ago!

The was around 45 minutes, an interval where I treated Isla myself to some Ben & Jerry's ice cream and then a 45 minute second half.

Before going to the show I checked online and saw that Chris and Pui did signings afterwards so as we came out of the auditorium and most people piled out of the front door, I ventured off to go and find the stars themselves. Isla had painted them some pictures so I had to make sure they got them!

We found them upstairs with only a few people waiting and so were soon at the front of the queue. Isla barely waited for the poor girl in front to say goodbye before she was bounding over to Pui like a playful puppy and throwing her arms around her like she was a long lost friend. She handed the paintings over, which Chris said he will get put up on the website, we got their autographs and were soon on our way home. 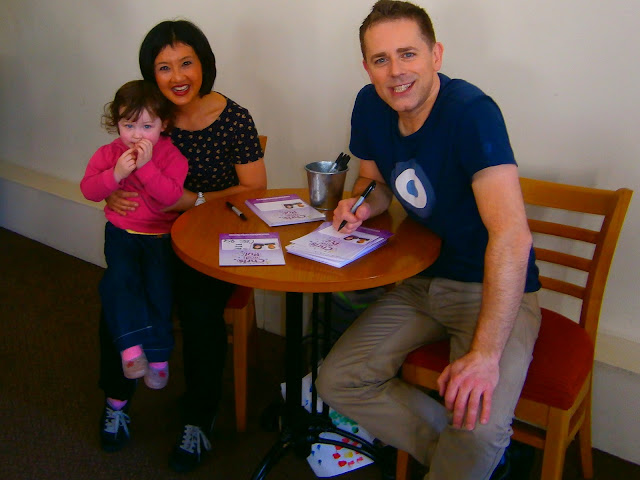 One very tired toddler fell fast asleep the minute her bum hit the car seat.....and on wakening she proceeded to wave the autograph in every ones face and jabber on ten to the dozen about all that she had seen.

*NOTE: This was NOT a freebie, it is not a sponsored post and I have not been asked to write this at all. I just enjoyed the show so much I wanted to let others know about it.*

The tour continues right through to the end of the year so pop along to www.chrisandpui.com to see if they are coming to a town or city near you!
Posted by Unknown at Monday, March 26, 2012 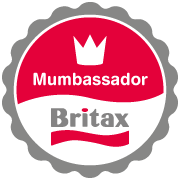